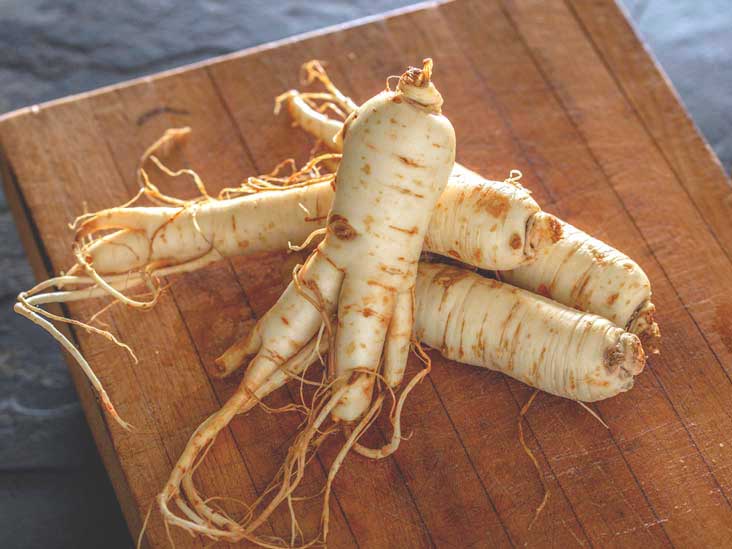 Ginseng refers to eleven different varieties of a short, slow-growing plant with fleshy roots. Supposedly, out of all of these, there are true ones and then the others. The most popular being 1) American ginseng (Panax quinquefolius), found in the Midwest to Maine, primarily in the Appalachian and Ozark regions and also in eastern Canada; and 2) Asian ginseng (Panax ginseng) from regions in the Far East, including China, Japan, Korea, and Siberia.

Panax originates from the Greek words “pan” which means “all” and “akos” (“panacea”) which means “cure”. Hence, ginseng is believed to restore and enhance wellbeing. It is one of the most popular herbal remedies and has been categorized as an adaptogen, which helps the body resist stressors of all kinds, whether physical, chemical or biological.

Traditionally used in Chinese Medicine (TCM) for centuries (at least 5,000 years!), Ginseng to restore deficient qi (vital energy) and regulate body systems. In TCM, that makes ginseng a superior medicine because it is thought that the primary purpose of the healing arts is to restore balance and strength so that the body can heal itself.

The American ginseng was used medicinally by many Native American tribes as a health stimulant, a sexual tonic, and for various health problems including headaches, female infertility, digestive problems, fever, for colic, colds, earache, and other ailments.

The two different sub-species vary in their concentration of active compounds and effects on the body. It is believed that American ginseng works as a relaxing agent (a “cooling”/yang effect), whereas the Asian variety has an invigorating (“warming”/yin) effect.

Due to the phenomenology of Ginseng, spindle-shaped with slender roots, it resembles the human body and is known as “ren shen” in Mandarin, which translates into “all healing man-root” or “essence of man” (and eputed as an aphrodisiac)

Ginseng is very popular and frequently used among athletes because of its ability to accelerate recovery of muscles after intense workouts.

Overall, both varieties of ginseng are believed to boost energy, lower blood sugar and cholesterol levels, reduce stress, promote relaxation, treat diabetes, and manage sexual dysfunction in men. Although the efficacy in humans are limited, lab studies on rats and some humans appear to be positive.

Generally, Ginseng is utilized as an extract and can be found in powder, tablet, capsule and oil forms. There are also other lines of products including organic herbs, spices, teas, aromatherapy, and bath products. Many chew on the stalk and juices from it. The berry pulp is edible as well and many studies are being conducted on the berry pulp juice.

But Ginseng root can be consumed in many ways. It can be eaten raw or you can lightly steam it to soften it. It can also be stewed in water to make a tea. To do this, just add hot water to freshly sliced ginseng and let it steep for several minutes. Ginseng can be added to various recipes like soups and stir-frys, too. Ginseng root is highly aromatic with a licorice-sweet flavor and earthy undertones.

You can take ginseng in doses of 1 to 2 grams of root 3 or 4 times per day. To maximize its benefits, you should take ginseng in 2–3-week cycles with a one or two week break in between.

The 200-mg dose, as opposed to the 400-mg dose, was more effective at improving mental performance and fatigue.

Ginseng may intensify the effects of caffeine and other stimulants, leading to a rapid heartbeat and possible sweating or insomnia. It could also cancel out the painkilling effects of morphine.

The herb can also increase the risk of bleeding when taken with blood thinners (anticoagulant drugs), such as warfarin or aspirin Other reasons not to take ginseng are its potential complications with alcohol, medications for the treatment of HIV, diabetic medications, heart medications, calcium blockers (nifedipine) immunosuppressants, antidepressants (especially monoamine oxidase inhibitors, MAOIs as it can induce convulsions and seizures), bitter orange, ephedra, and bitter mallow.

In 2015, the New York Attorney General’s office tested herbal products from four major retailers (GNC, Target, Walmart, and Walgreens). They found that 79% of the herbal products tested did not contain any of the plants listed on the ingredient labels and many contained unlisted contaminants from other plants. Checking the ingredients of ginseng products before purchase is strongly recommended.

Ginseng and licorice roots are likely the most utilized TCM ingredients and both roots are also now utilized by the nutraceutical and functional food industries for their purported bioactive and functional properties. to improve the function of the adrenal glands, especially in people who have taken steroid drugs long-term. Steroids tend to suppress the activity of the adrenal glands. The adrenal glands produce important hormones that regulate the body’s response to stress. Licorice is a very sweet moist soothing herb that detoxifies the body. The sweetness of the licorice masks the slight bitterness of the ginseng (in a tea form).

More than 80.000 tons of ginseng is produced every year. While cultivated ginseng runs for about $50 a pound, the prices for wild, older roots are almost unimaginable. A thirty-year-old wild root brings in several thousands dollars a pound in China (which a local buyer in Pennsylvania might pay $10). The high-end stuff goes to collectors; they treat it as art.

At the current prices, a half acre garden could produce $100,000 worth of seeds and roots over a six year period, or over $16,000 per year. As any ginseng grower will tell you, that beats growing potatoes by a country mile!

A root Mark MacDonald dug up on private property in western Allegany County weighs 1.11 pounds and the main body is more than a foot long. The largest ginseng listed in Guinness Book of World Records is 2 pounds, but it is a cultivated root, not wild

The subsequent discovery of the closely related medicinal herb, American ginseng, near Montreal, Canada in the early 1700s by a French Jesuit priest, ignited three centuries of trade between North America and China. Within decades, the plant became scarce in Canada, and traders looked to the United States for other sources of wild ginseng. The Cherokee were using the root as a tonic and the legendary frontiersman Daniel Boone made much of his fortune from the ginseng trade in the late 1780s hiring sang collectors, or “sangers,” to mine for golden root and shipping barge loads to a market in Philadelphia.

During the late 1800s, as prices for wild ginseng soared and supplies diminished, Wisconsin farmers began cultivating it in fields. Wisconsin’s ginseng board reports that one county in the state now exports more than a million pounds of the cultivated root each year—95 percent of U.S. production.

Ginseng consumers often soak the roots in vodka and water for a potent homemade tincture. Some ginseng growers sell premade concoctions and ginseng berry juice. An emerging market for ginseng leaves used in tea is giving growers a new source of revenue.

Ginseng internationally protected species. Yet many people have no idea of the conservation concerns. It’s like the Wild West. Sometimes encounters between landowners and illegal poachers turn deadly.

Ginseng is even cultivated in parts of California.

Ginseng is a flowering plant that belongs to the ginseng family.  Ginseng grows on the slightly acidic, well drained, sandy loam forest soil well fertilized with rotted leaves or other mulching material. It does not grow in the warmer portions of the US and it requires deciduous forest canopy with 70% to 80% shade to grow.

Nowadays, however, the American ginseng market is highly regulated due to its status as an endangered species. It can only be picked after it has aged for five years and 18 states require at least three leaves on the plant. Its harvest season usually runs from September to December. It is protected under the Convention on International Trade in Endangered Species of Wild Fauna and Flora (CITES), the global treaty intended to prevent plants and animals with commercial value from being wiped out. Ginseng isn’t listed in the United States as an endangered species, but every year federal authorities weigh the pros and cons of adding it. Some negative impacts would be that black-market prices would shoot through the roof, and if the prices spike, there will be more harvesting and theft.

Many ginseng conservationists, and even some dealers, agree that the laws should be tougher.  Some experts say that protecting one of the country’s most traded plants for the long-term will hinge on “conservation through cultivation”—collectors growing their own roots.

The berries must be red, and when the diggers harvest the plant, they need to take the seeds from the berries and plant them in the ground where the root was.

If collecting wild ginseng sounds easy, like casually plucking hundred-dollar bills from the forest floor, it’s not. The plant grows tightly rooted to steep, rocky hillsides in mountain woodlands thick with snakes and black bears, often in patches of briars and nettles that shred clothing and skin. It takes skill and patience to extract the roots intact.